Eight Exceptional Holiday Cottages on the Isle of Anglesey 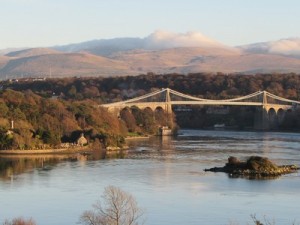 On your journey to Cerrig y Barcud, or during your stay with us, you will almost certainly cross the Menai Straits by one of the iconic Menai Bridges; either Thomas Telford’s Menai Suspension Bridge, or by Stephenson’s Britannia Bridge

Approximately 14 miles long, and up to 2 miles wide in places, the Menai Straits narrow to just 200m in the treacherous “Swellies” between the two bridges where tidal currents from both ends meet rocks beneath the surface causing over-falls and whirlpools which can be of great danger to boats large and small. This was the site of the grounding and subsequent sinking in 1953 of the Naval training ship HMS Conway, the largest ship ever to have passed through the Swellies, and clearing the Menai Bridge with just 3’ to spare. 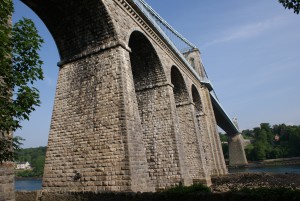 The first iron suspension bridge of its kind in the world, and probably Thomas Telford`s most acclaimed achievement. In addition to providing for the safe passage of travellers by bridge, he also had to allow for the height of ships passing under the bridge; the criteria was that the bridge should have at least 100 foot of clearance from the span to the water.

Building of the Suspension Bridge began in 1819 with the stone pillars, quarried from nearby Penmon quarry. Once they were in place, the enormous task of lifting the 16 chains that would span the bridge began. These would be the main supports, and in order to lift the central section of chain – weighing 23 and a half tons – it took 150 men using block and tackle..

Completed in 1926, the bridge was a massive improvement, to the locals, who for the first time could cross to and from the mainland without fear of perishing in the dangerous waters of the Menai Straits. No doubt it came as something of a relief to the cattle; until then, they had been required to swim across the Straits to market on the mainland

Just as critically, this was the final part of Telford’s extensive improvements to the Holyhead to London road, which reduced the journey time by 9 hours to a mere 27 hours! Thomas Telford had been commissioned not simply to construct a bride across the Straits, but to build a road connecting London to Dublin, making it the first major road building project of it's time since Roman Britain. He utilised much of the route of the Romans' Watling Street which took travellers most of the way from London to Shrewsbury, but it was Telford who designed and engineered the route through the hills and valleys of Snowdonia – now the A5

This route had gained much greater importance since the Act of Union had joined Ireland with the United Kingdom in 1800. Toll Houses lined the route, with the most well known being that you will have passed at Llanfairpwll, on your way to Cerrig y Barcud. The toll charges are still displayed on the wall of the house, which interestingly sits next to the first ever Women’s Institute building! 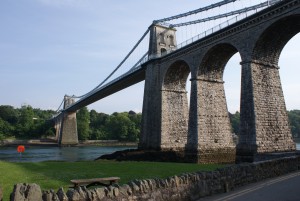 It is well worth a short walk down to the Straits beneath the Menai Bridge and the surrounding area. From the car park next to the Jade Garden Chinese (just down from Waitrose), a woodland walk through the woods leads down to Church island. Take the Belgian promenade (built by refugees from Belgium in the first World War), which brings you to Carreg y Halen (literally “rock of salt”). A hundred yards further on, you can walk beneath the incredible arches and columns of the Menai Suspension Bridge – probably the best place from which to appreciate this engineering feat. 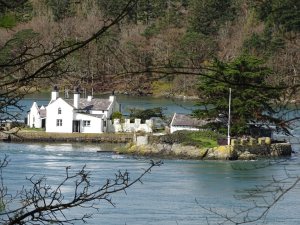 To take a longer walk, either continue along into the town of Menai Bridge, or head back to Church Island, and onwards towards the Britannia Bridge (the footpath will take you past the rugby club and up to the road for a few hundred yards before heading back down to the Straits). You will pass the small island in the middle of the strait, Ynys Gored Goch the house in the middle of the Straits, on which is built a house and outbuildings and around which are the significant remains of mediaeval fish traps - now no longer used. 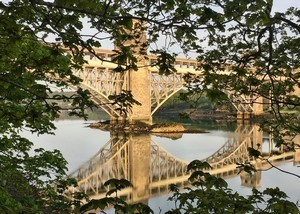 Traffic from London to Holyhead, and on to Dublin continued to increase, it became necessary to provide a rail link between the cities. In 1845, consent was given to the route, to include the construction of the Britannia Bridge, which was to be capable to bearing the heavy load associated with trains, whilst still allowing shipping to pass beneath.

George Stephenson constructed a bridge with two main spans of 140m long rectangular iron tubes, each weighing 1,500 tons, and supported by masonry piers, the centre one of which was built on the Britannia Rock. Two additional spans of 70m length completed the bridge making a 461m long continuous girder inside of which the train would run. Incredibly, the box sections were assembled on-shore, then floated out into position before being lifted into place. The bridge was opened in 1850.

If you take a visit to Plas Newydd during your stay, you will see the original plans for the construction of the Britannia Bridge 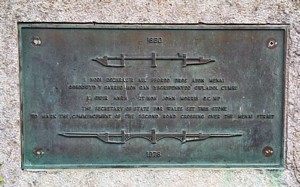 In 1970, the bridge was almost completely destroyed by fire after a group of teenagers looking for bats dropped the burning paper they were using as a torch. Whilst considering how to repair the bridge, a local surveyor came up with the idea of creating two bridges in one – with the railway running beneath a new level created for road traffic. The new bridge is now supported by arches, rather than the original tubes. The image shows a plaque mounted at the base of the bridge commemorating its re-opening.

When the original bridge was built, four lions took pride of place at the entrance to the tubular bridge – two on each side of the Straits. These now sit forlornly several metres below the road surface, and not visible to the thousands of vehicles streaming past overhead.

More information and tours of the brides can be found at the Menai Bridges Exhibition located opposite Waitrose on the Anglesey side of the Menai Suspension Bridge.